The awe-inspiring Justin kindly agreed to put together the below race report for us following his recent Ironman World Championships in Kona - it's a brilliant read, enjoy!  Thanks and MASSIVE congratulations Justin!

I was lucky enough to compete in the Ironman World Championships in Kona, Hawaii on October 14th. I had put in a good performance at Ironman Switzerland that placed me high enough to secure a place.

Kona was an amazing experience. The event itself was a huge spectacle, with the little coastal town completely transforming for this amazing race. The setting is what makes the event so unique, with the rolling hills of black lava rock stretching as far as the eye could see and the intense heat from the relentless sun adding to the challenge.

The swim was tough but still really enjoyable. The washing machine of 1,700 male competitors made for choppy surroundings on top of the water, but this was a total contrast to the coral, fish and turtles looking up from beneath. There was a bit of swell at the 1.9km turnaround which we don’t get in Brockwell Lido but it was nothing too strong.

The cycle was where the conditions of Kona really began to bite. The winds were low for the first third of the course, but began to pick up for the climb towards the Hawi turnaround and the ride back into town. The professional field had managed to get in before the wind had really picked up but the last 50km of my cycle was a very tough slog straight into headwind all the way. Lots of riders were picked up for drafting in this section of the race but I managed to resist the temptation for a rest on the wheel of another competitor. Thankfully there was regular aid stations well stocked with cold water and the incredible scenery was there to temporarily distract from the suffering.

The run in Kona has a few hills but it is the heat that provides the greatest challenge. As with most of the other competitors I stuck to some good advice and kept the pace under control for the full 42.2km. It was my slowest ever Ironman marathon but even with keeping a lid on the pace it was definitely the hardest. Wearing 5 layers of winter clothes to the Windrush track sessions was not quite enough to prepare for the heat of Kona!

On the run there was great camaraderie between the participants and again the aid stations were regular and well stocked. The run course takes you through town for the first 10k which is great with all the crowd support, but then comes the long, hot slog out and back from the turnaround point at Energy Lab. I’m sure all of the competitors, definitely including me, had some rough patches on the run, questioning the point of it all and thinking that how much better beer would taste than High5. A few magic sponges would help get the body and mind back on track however, and all of that pain disappears as the finish line comes into view.

The finishing stretch of the run is along the famous Ali’i drive, which is lined with supporters and provides a once in a lifetime experience that makes the race so amazing. With crossing the line comes an amazing sense of achievement (and relief) that anyone who has finished a triathlon can relate to. The party in Kona goes long into the night, including a huge celebration in the last hour before the 17-hour cut-off. For me, that beer I was longing for on the run ended up tasting not so sweet after all, as my stomach had almost shut down after the heat and effort of the race. After several hours of post-race stomach cramps a quick intravenous shot from the medical tent thankfully fixed all of that for me, and I was straight into the beer and pizza to celebrate. 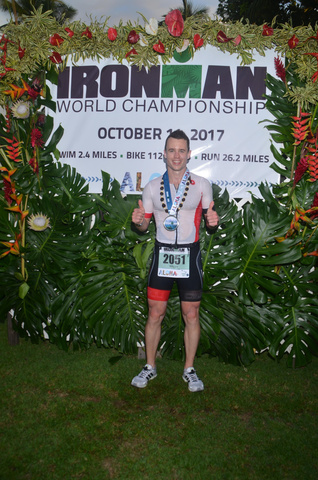 You need to be a member of Forum - Windrush Triathlon Club to add comments!

Comment by Justin Walsh on November 3, 2017 at 19:55
Thanks for all the club support guys! Could not have done it without the winter long rides or the weekly track sessions.

Great stuff Justin, you did Windrush proud! Thanks for the blog too.

Watched the live stream of the race and looked very exciting. Such an amazing achievement. Well done Justin!